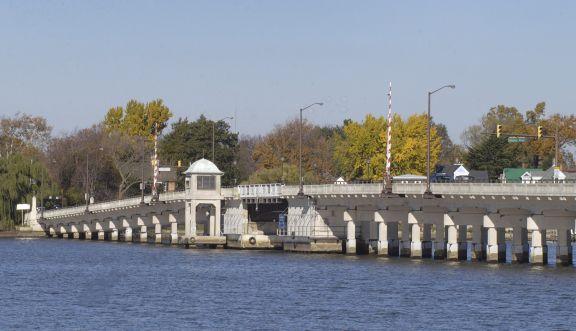 To Whom It May Concern.

We are fortunate that Chestertown and Kent County are particularly effective and successful in responding to matters of community concern.  It seems that two of the most recent ones – the hospital matter and the bridge situation – have been successfully addressed, for now at least.

With respect to the bridge, my view is that now is an appropriate and necessary time to reflect upon one of the profound realities of the situation which, to some extent, has been lost in the discussion . . . that is, that the bridge is in dire need of repair.

I have been impressed over the past several years that the Maryland State Highway Administration has been particularly insistent in its desire and efforts to repair the bridge as it has determined is needed.  That tells me something loud and clear.

That something is that for those with information that is not available to us all, there is a genuine concern about the condition of the bridge.  What is also of real concern is what is between the lines.

By that I mean that it may be that the structural integrity of the bridge is such that it is vulnerable to some sort of catastrophic failure that would render it impassable – perhaps for a much longer time than is currently scheduled for the repairs – and possibly until a replacement bridge is constructed.  That could take years, and would be a community nightmare with far reaching consequences that would dwarf the disruption and inconvenience that a temporary closing will cause.

If that is true, it is not shocking.  After all, the bridge is almost 90 years old, and was designed for significantly lighter and less vehicles than currently cross it daily.

To that end, I share the view that we should be vigilant to the possible unintended consequences of some of the current resistance to the bridge repairs.

So my thoughts are these.

First, as a general perspective, I think we should all be prepared for some sacrifice, even though the impact of even a temporary bridge closing will be more acute on some more than others.  Isn’t that always what happens with things like this? . . . but an ounce of prevention now – and sacrifice – may be worth much more than a pound of cure later.

Second, although I am not an engineer, it seems reasonable to expect that the Chester River Bridge is under severe stress from the heavy trucks and equipment that cross it at night, and even during the day.  Until it is repaired, why not impose a weight limit?  That would be a burden on those affected who would have to travel north to the Crumpton bridge or Route 301, but all in all, the public would benefit if such a weight limit would be instrumental in preventing a catastrophic failure.

Third, I think it is time for those who are involved to roll up their sleeves and work together to establish a reasonable, prompt and firm schedule for the repair and the necessary closings.  And we should all stick to it and plan for the inconvenience accordingly.

Finally, think Flint.  It may be counter-intuitive, but by that I mean that we should appreciate the continued efforts of the SHA to monitoring the condition of the bridge – by informing us of what we do not know – and to make the necessary repairs before a catastrophic failure of the bridge.  At a time when there is so much cynicism about government, I think we are fortunate to have a state agency which wants to help us and is willing to spend the money to do so.

Let’s face it . . . there is no good time for the bridge to be closed for repairs, but let’s do it before it is too late.